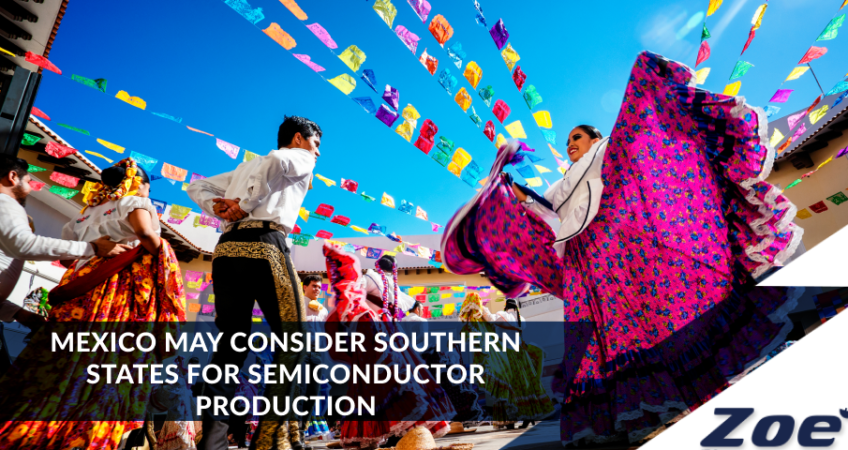 As Mexico aims to boost its manufacturing of semiconductors, it may build production facilities in its southern states, where much-needed water is available, according to Economy Minister Tatiana Clouthier.

At the so-called High-Level Economic Dialogue (HLED) between the United States and Mexico, held in Washington last week for the first time in several years, the neighboring nations agreed to make shared supply chains, especially for semiconductors, more competitive.

The agreement comes as an ongoing semiconductor chip shortage has forced North American automakers to suspend production, and officials warn the problem is getting worse.

Since the production of “semiconductors requires a lot of water… we may need to go further south,” where water is much more plentiful than in the arid northern states near the U.S. border, Clouthier told Reuters in an interview.

President Andres Manuel Lopez Obrador has made investing in and boosting the development of Mexico’s poorer southern states a key goal of his administration.

“When we talk about balancing the supply chain, we are talking about moving them here,” Clouthier said, noting that the Mexican states of Jalisco and Baja California already have semiconductor production.

“Mexico can contribute on the assembly, packaging and the wafers,” Clouthier said. Wafers are the silicon discs on which semiconductors are made in bulk, and each one can contain thousands of chips.

Mexico and the United States agreed at the HLED to create bilateral working groups on supply chains for semiconductors, as well as on medical devices and pharmaceuticals, said Clouthier, who also met with the Semiconductor Industry Association and the Information Technology Council.

She said the semiconductor working group will meet for the first time next week and is scheduled to present its results on Nov. 9.

Mexican officials met with U.S. Commerce Secretary Gina Raimondo in Washington a month and a half ago to discuss semiconductors.

Clouthier also said the two countries are in the early phase of creating a working group for the development of batteries for electric vehicles.

“We have many of the key ingredients, of the minerals that are required for the production of batteries or their components,” said Clouthier.