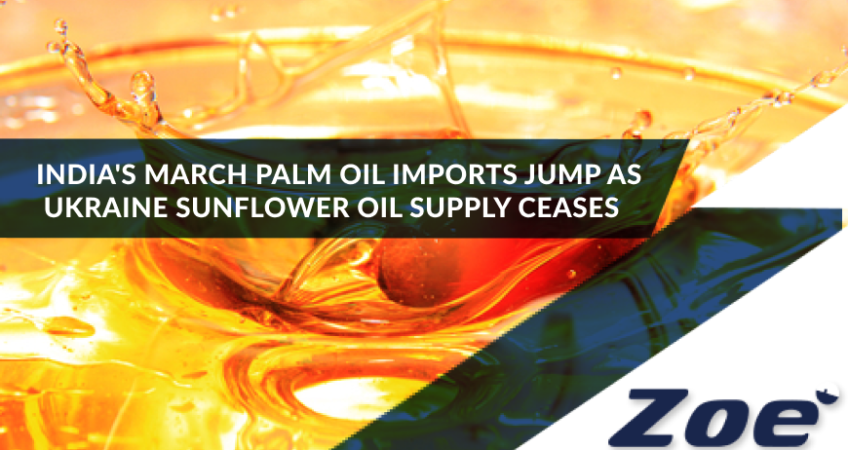 India’s palm oil imports jumped 21% in March from the previous month as traders moved to secure alternatives to sunflower oil that can no longer be bought from Ukraine, four dealers told Reuters.

A poor soyoil crop in South America, meanwhile has limited India’s ability to rely on that edible oil as a substitute for Ukrainian sunflower oil.

Indian demand contributed to the palm oil price, as indicated by the futures contract, reaching an all-time record of 7,268 ringgit per tonne on March 9, although it has since fallen to 5,741 ringgit per tonne.

In March, 550,000 tonnes of palm oil landed in India, up from 454,794 tonnes in February, said a Mumbai-based dealer with a global trading firm.

India imported 210,000 tonnes of sunflower oil in March, up from 152,220 tonnes in February, helped by the arrival of a few ships that had left Ukraine before the war, Patel said.

“But there are limitations. We cannot import more than 100,000 tonnes per month in Ukraine’s absence. Demand is there for 200,000 tonnes,” Bajoria said.India has contracted for 45,000 tonnes of Russian sunflower oil at a record high price for shipments in April as edible oil prices in the local market have surged because of the cessation of Ukrainian supply.

The Solvent Extractors’ Association of India, a trade body based in the commercial capital of Mumbai, is likely to publish March’s import figure in mid-April.

India imported about 310,000 tonnes of soyoil in March, 18% less than in February, dealers said.