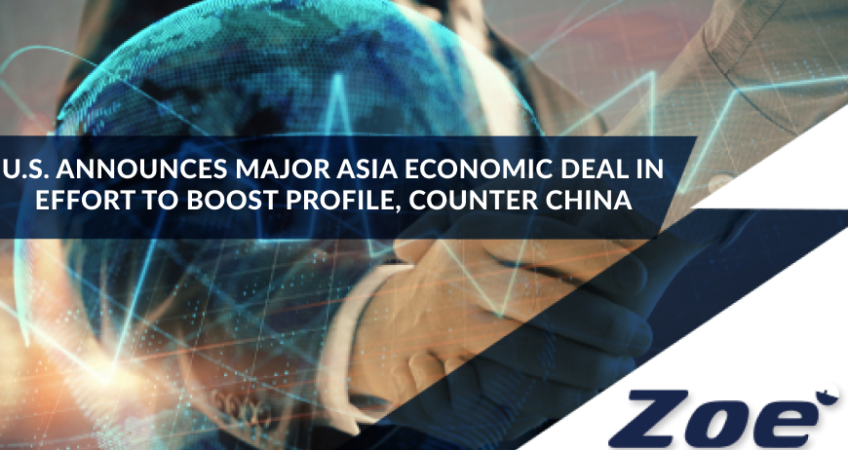 In a move to raise its economic profile and create another counterbalance to China within Asia, the United States announced on Monday the Indo-Pacific Economic Framework with Asian partners including Australia, Japan and the Republic of Korea.

It’s a broad plan designed to help expand the U.S.′ “economic leadership” in the Indo-Pacific region. The group wants to set international rules on the digital economy, supply chains, decarbonization and regulations applying to workers.

U.S. President Joe Biden has said tackling inflation is a priority and this framework is designed to help lower costs by making supply chains more resilient in the longer term.

Importantly, the IPEF is not a free trade agreement. Biden faces political pressure from both the left and right in the United States to avoid free trade deals.

It also is not a security pact and is separate from the Quad defense group that includes the United States, Japan, India and Australia, U.S. National Security Advisor Jake Sullivan told reporters on Sunday.

Biden is in Tokyo this week meeting regional leaders about the IPEF and the Quad.

Despite avoiding trade deals, the United States wants to boost its profile in Asia’s economic realm, where China is the dominant country despite American allies Japan and South Korea boasting large economies and India, a member of the Quad, growing by leaps and bounds.

The United States needs “enhance its economic competitiveness in the region,” according to Ali Wyne, a senior analyst with Eurasia Group’s Global Macro practice.

“Even those countries that have significant and growing apprehensions about China’s foreign policy and strategic objectives appreciate that they cannot meaningfully decouple from its economy over the short term,” Wyne said, “so the Biden administration will work to gain maximal traction for the Indo-Pacific Economic Framework.”

U.S. officials have been careful to avoid mentioning China in discussions about the IPEF and has denied that it’s a “closed” group, as China has claimed.

Chinese state-controlled media outlet Global Times on Saturday said “the main goal of Biden’s trip to South Korea and Japan is trying to form a new political posturing against China, by establishing an alliance around Washington in the Asia-Pacific region.”

Sullivan told reporters on Sunday that he’s not surprised “that China has concerns about the number of countries, the diversity of countries who have expressed interest in and enthusiasm for IPEF.”

Speaking to CNBC’s “Capital Connection” on Monday, before the details of the IPEF were released, senior fellow at Stimson Center in Washington DC Yuki Tatsumi said the plan would be a hard sell in the region.

She said it was similar to the Trans Pacific Partnership that the U.S. withdrew from during the Trump administration, when countries in the region struggled to be eligible to become a part of it.

In addition, Tatsumi said the U.S. had sharpened its approach to China under the administrations of former Presidents Donald Trump and Barack Obama.

“So regardless of whatever new policy initiatives come out of Washington, the strategic competition between U.S. and China is going to intensify,” she said, adding that the new framework will likely only accelerate that trend.