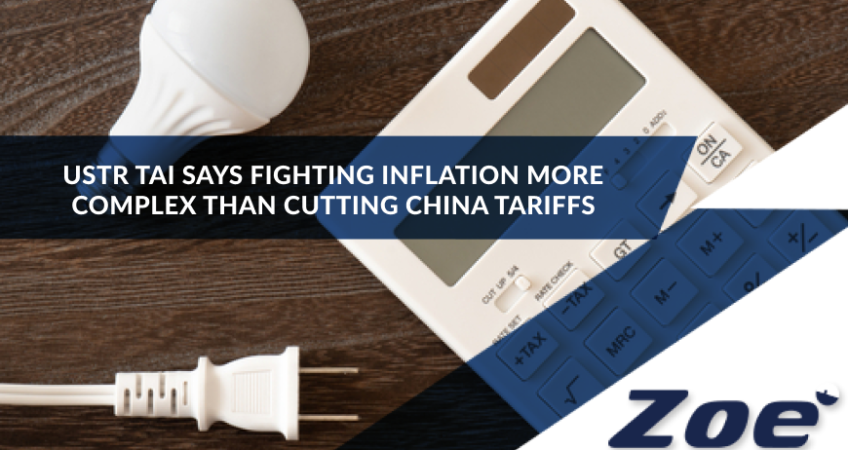 Posted by Editor In Noticias 0 comment
Trade Representative Katherine Tai on Monday said fighting inflation is a more complicated issue than can be addressed with a “singular focus” on China tariffs, and that it was important to bring a “thoughtful, strategic, deliberate” approach to the U.S.-Chinese trade relationship.

Tai, in remarks to the Washington International Trade Association, said inflation was “scary” and hurting Americans’ pocketbooks but was a complicated issue with many causes.

“The economy is large and there are a lot of pressure points and levers in that economy,” Tai said. “If we’re going to take on an issue like inflation, and given the seriousness that it requires, then our approach to tools for mitigating and addressing that inflation need to respect that it is a more complicated issue than just tariffs at the border.”

Tai’s remarks indicated that a debate within President Joe Biden’s administration was continuing over whether to cut some U.S. “Section 301” duties on hundreds of billions of dollars of Chinese imports of up to 25% imposed by former President Donald Trump.

Tai has been at odds with U.S. Treasury Secretary Janet Yellen over the future of the Section 301 tariffs, with Yellen arguing that they hurt U.S. consumers and businesses and that they could have some effect on reducing prices.

Tai said the Biden administration over the next two weeks would begin defining its vision for another key trade initiative with 13 Asian countries. Tai added that the Indo-Pacific Economic Framework talks need to be “holistic, extremely flexible, adaptable and really, really pragmatic.”

She said she hopes to have a more formalized convening of participating countries this summer, including at the trade minister level, to discuss the negotiating pillars of labor rights, high environmental standards, digital trade and supply chain resilience.
Source: U.S.News
Share: