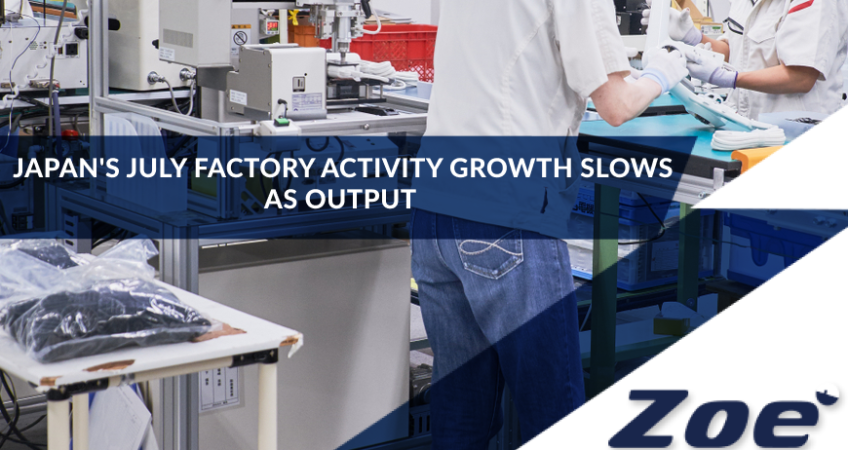 Japan’s manufacturing activity expanded at the weakest rate in 10 months in July, as pressure from rising prices and supply disruptions hurt output and new orders, suggesting a solid post-pandemic economic recovery is still some way off.

That marked the slowest pace of growth since September last year, and was slightly lower than a 52.2 flash reading.

Japan’s economy has struggled to mount a sure-footed recovery from the pandemic’s hit, with recurrent flare-ups of COVID in China, the Ukraine war and surging commodity prices all dragging on overseas demand.

Manufacturing activity suffered from contractions in output and overall new orders as well as a slower expansion in the backlog of work, the PMI survey showed.

All the same, firms continued to add to their staffing levels, while also remaining confident about conditions a year ahead, though the degree of optimism was little-changed from June.

“The headline PMI masked some worrying trends when looking at the underlying sub-indices, which add downside risks for the sector,” said Usamah Bhatti, economist at S&P Global Market Intelligence, which compiles the survey.

“Backlogs of work increased at the softest rate in 17 months, which hints at a further weakening of output over the coming months.”

Official data released on Friday painted a brighter picture of manufacturing activity, which showed Japan’s factories in June ramped up output at the fastest pace in more than nine years as disruptions due to China’s COVID-19 curbs eased.

But a government official also warned downside risks for output remained as parts supply delays lingered. That is one of many reasons why the Bank of Japan remains resolutely committed to its ultra-low policies despite a global trend of rising interest rates to fight rampant inflation.