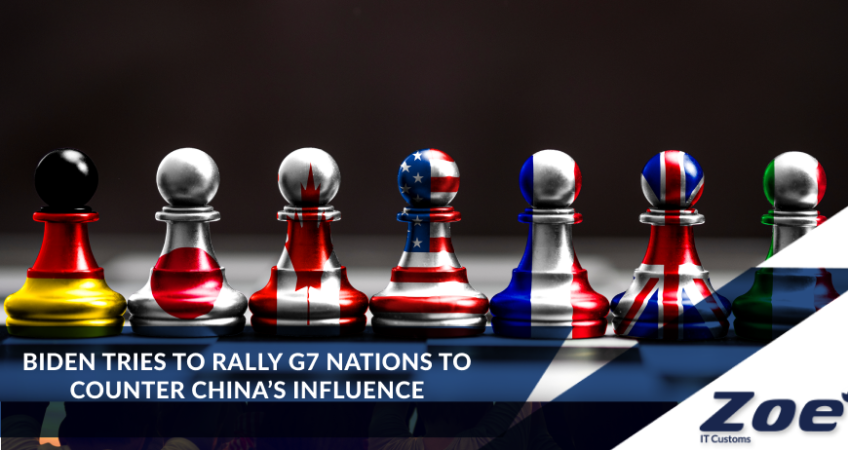 President Biden urged European nations and Japan on Saturday to counter China’s growing economic and security influence by offering developing nations hundreds of billions in financing as an alternative to relying on Beijing for new roads, railways, ports and communications networks.

It was the first time the world’s richest nations had discussed organizing a direct alternative to China’s Belt-and-Road Initiative, President Xi Jinping’s overseas lending and investment push, which has now spread across Africa, Latin America and into Europe itself. But the White House cited no financial commitments, and there is sharp disagreement among the United States and its allies about how to respond to China’s rising power.

Mr. Biden has made challenging a rising China and a disruptive Russia the centerpiece of a foreign policy designed to build up democracies around the world as a bulwark against spreading authoritarianism. Beijing, for its part, has pointed to the poor U.S. response to the pandemic and divisive American politics — particularly the Jan. 6 riot at the Capitol — as signs that democracy is failing.

In size and ambition, the Chinese development effort far surpasses the Marshall Plan, the United States’ program to rebuild Europe after World War II. At the Group of 7 summit meeting, discussions on Saturday about how to counter it reflected the debate within the West about whether to regard China as a partner, competitor, adversary or outright security threat.

It is far from clear that the wealthy democracies will be able to muster a comprehensive response.

The plan described by the White House appeared to stitch together existing projects in the United States, Europe and Japan, along with an encouragement of private financing. A fact sheet distributed to reporters gave it a name, “Build Back Better for the World,” with roots in Mr. Biden’s campaign theme — shortened to B3W, a play on China’s BRI.

It emphasizes the environment, anti-corruption efforts, the free flow of information and financing terms that would allow developing countries to avoid taking on excessive debt. One of the criticisms of Belt and Road is that it leaves the nations that sign on dependent on China, giving Beijing too much leverage over them.

It was a sign of the growing concern about pervasive Chinese surveillance that the British hosts of this year’s G7 gathering cut off all internet and Wi-Fi links around the room where the leaders were meeting, leaving them disconnected from the outside world.

The leaders largely agree that China is using its investment strategy both to bolster its state-owned enterprises and to build a network of commercial ports and, through Huawei, communications systems over which it would exercise significant control. But officials emerging from the meeting said Germany, Italy and the European Union were clearly concerned about risking their huge trade and investment deals with Beijing or accelerating what has increasingly taken on the tones of a new Cold War.

Mr. Biden used the meeting to advance his argument that the fundamental struggle in the post-pandemic era will be democracies versus autocracies.

The first test may be whether he can persuade the allies to denounce China’s use of forced labor and, in the words of a senior administration official who briefed reporters, “take concrete actions to ensure that global supply chains are free from the use of forced labor.” It is unclear, American officials said, what kind of language about rejecting goods or investments in such projects would be included in the meeting’s final communiqué, which will be issued on Sunday.

But the meeting comes just a day after Secretary of State Antony J. Blinken, who is traveling here with Mr. Biden, told his Chinese counterpart in a phone call that the United States would actively oppose “ongoing genocide and ethnic cleansing” against Muslims in Xinjiang, in China’s far western territory, and “the deterioration of democratic norms” in Hong Kong. European leaders have largely avoided that terminology.

The divisions on how to regard China help explain why the West has until now failed to muster a coordinated response to Belt-and-Road. A recent study by the Council on Foreign Relations described Washington’s own reactions as “scattershot,’’ a mix of modest Congressional adjustments to rules governing the Export-Import Bank to compete with Chinese loans in high technology, and efforts to ban Huawei, China’s telecommunications champion.

The risk for the American strategy is that dealing with a patchwork of separate programs — and a Western insistence on good environmental and human rights practices — may seem less appealing to developing nations than Beijing’s all-in-one package of financing and new technology.

“Many BRI countries appreciate the speed at which China can move from planning to construction,’’ said the council report, which was written by a bipartisan group of China experts and former U.S. officials.

Those countries, it added, also appreciate China’s “willingness to build what host countries want rather than telling them what they should do, and the ease of dealing with a single group of builders, financiers and government officials.”

Still, Mr. Biden senses an opening, as European nations have begun to understand the risks of dependency on Chinese supply chains, and have watched China’s reach extend into their own backyards.

Britain, which once pursued arguably the most China-friendly policy in Europe, has swung firmly behind the American hard line, particularly on Huawei, which the U.S. sees as a security threat. After trying to accommodate Huawei, it announced, under Prime Minister Boris Johnson, that it was ripping out older Huawei equipment from its networks.

Germany, for which China has become the No. 1 market for Volkswagens and BMW’s, remains committed to engagement and is deeply resistant to a new Cold War. It has kicked decisions about using Huawei and other Chinese-made networking equipment down the road, after threats from Chinese officials to retaliate with a ban on the sale of German luxury cars in China.

Italy became the first member of the G7 to sign up to Belt and Road in 2019. It then had to back away, in part, under pressure from NATO allies who feared that Italian infrastructure, including the telecommunications network, would be dependent on Chinese technology.

When China shipped face masks and ventilators to a desperate Italy during its Covid outbreak, an Italian official pointedly told his fellow Europeans that the country would remember who its friends were after the pandemic.

France did not join Belt and Road, though it has welcomed Chinese investment in the country and stopped short of banning Huawei from its wireless network. Relations with China cooled after President Emmanuel Macron criticized Beijing for its lack of transparency on the origins of the coronavirus.

That is easier said than done. Britain shifted closer to the United States under pressure from former President Donald J. Trump — less because it changed its view about the strategy or security risks posed by China than because, in the aftermath of Brexit, it feared being isolated from its most important ally.

Chancellor Angela Merkel, a steadfast believer in engagement with China, will leave office in a few months. But Germany’s policy may not change much, particularly if her successor as the leader of Christian Democratic Party, Armin Laschet, replaces her in the chancellery. He is viewed as being in lockstep with Ms. Merkel.

France is a different story. Mr. Macron faces a formidable challenge from the populist right in elections next year. The right-wing leader, Marine LePen, has vowed to stand up to China’s ambitions in the Indo-Pacific region.

“Whenever you have one of these meetings, you’re going to see fluidity in one country or the other,” said Simon Fraser, a former top civil servant in Britain’s Foreign Office. But, he added, “There’s a lack of cohesion on the European side that needs to be addressed.”

Italy is a good test case of how China has tried to build influence in Europe. Since joining Belt and Road, Rome has signed nearly two dozen deals with Beijing ranging from tax regulations to sanitary requirements on pork exports. But Italy also vetoed a 5G deal between Huawei and one of its telecommunications companies.

The centerpiece of China’s investment in Europe is a rail network that would connect its factories on the Pacific to London — a project that China’s premier, Li Keqiang, once described as an express lane to Europe. Italy, which has a terminus on the route, welcomes the investment as a tonic for its struggling economy.

But Britain’s relations with China have gone into a deep freeze. The government imposed sanctions over China’s treatment of its Uyghur population and offered residency and a path to citizenship to more than 300,000 holders of British overseas passports in Hong Kong, after China imposed a draconian national security law on the former British colony.

China’s human rights record, analysts say, is hardening European attitudes across the board. The European Parliament declined to ratify a landmark investment treaty, championed by Germany, because of China’s heavy-handed reaction to sanctions over its treatment of the Uyghurs. China sanctioned 10 European Union politicians.

There is also evidence that Mr. Biden recognizes that his aggressive language about China — as the great adversary in a fateful struggle between democracies and autocracies — is discomfiting to many Europeans. He has largely shunned that framing in the days leading up to his European tour, speaking more generally about the need to promote democracies in a competitive world.

For some analysts, that opens the door to a hopeful scenario in which the United States and Europe move toward one other, moderating the most extreme aspects of confrontation versus conciliation in each others’ approaches.