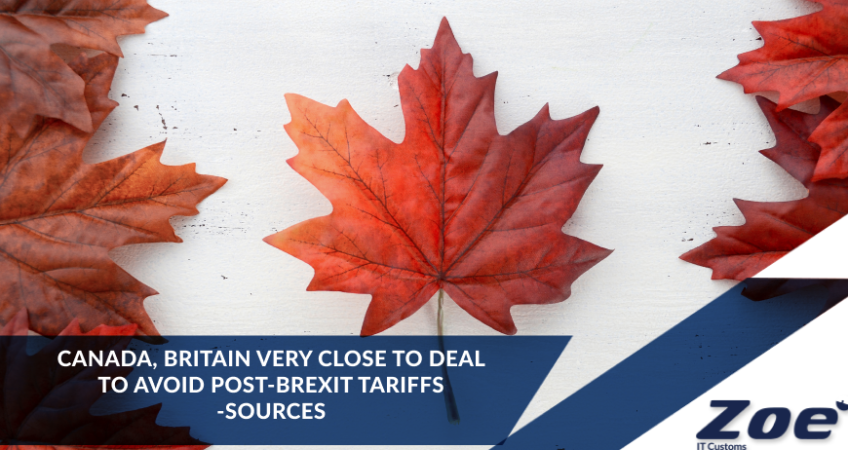 OTTAWA (Reuters) – Canada and Britain are on the verge of a deal to ensure that free trade between the two, post-Brexit, can continue until the Canadian Parliament approves a new bilateral agreement, according to four well-placed sources.

The two sides are discussing a bridging mechanism allowing them to temporarily waive tariffs, the sources said. This would likely take the form of a memorandum of understanding that Ottawa could agree to without needing approval from legislators.

This means both sides can avoid imposing tariffs on each other when Britain leaves the European Union on Dec 31.

The two nations struck a roll-over trade deal on Nov 21 to protect the flow of C$29 billion ($22.7 billion) worth of goods between them.

But the Canadian House of Commons ended its fall session on Dec 11 without approving the agreement, meaning the two nations would in theory have to start imposing tariffs on each other’s exports on Jan 1.

“Something should be announced in the next couple of days. This is a story of continuity – businesses will not have to pay tariffs,” said one of the sources, who requested anonymity given the sensitivity of the situation.

A second source said the talks had been very positive and also ruled out tariffs.

Canada’s House of Commons is due to return on Jan 25.

As Britain prepares to end its transition out of the European Union, it has negotiated multiple rollover bilateral deals to maintain trade, with many simply replacing the terms the bloc had already agreed.

A spokeswoman for Canadian Trade Minister Mary Ng said Ottawa was “actively working with Britain on mitigation measures to ensure that there is a smooth transition.”

A spokesman at the British high commission – or embassy – in Ottawa was not immediately available for comment.