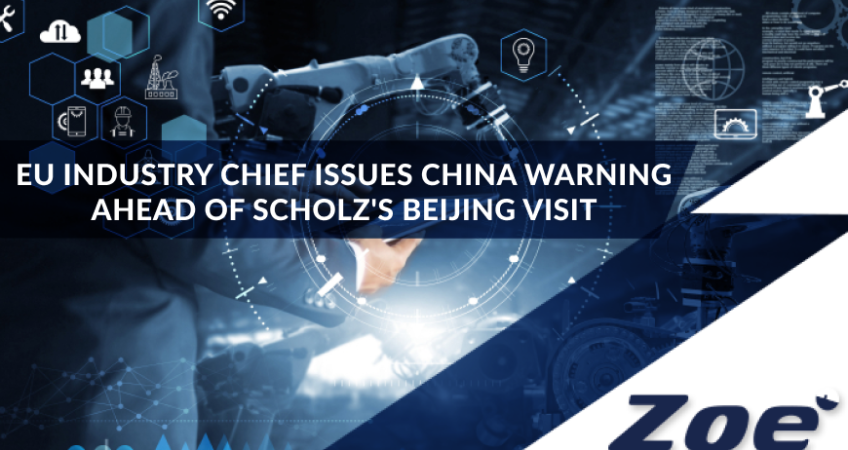 The European Union’s industry chief said on Monday that European governments and companies must realise China is a rival to the EU and they should not be naive whenever they approve Chinese investment.

European Commissioner Thierry Breton’s comments appeared to be aimed in part at Germany, whose Chancellor Olaf Scholz will visit Beijing on Friday.

Over the past few years, the EU has passed a series of defensive measures designed to better control investment from state-owned foreign players, including from China, to ensure rival powers do not gain more political leverage over the bloc.

But many diplomats have been baffled by Germany’s recent decision to approve the sale of a stake in Hamburg’s port, the country’s largest, to a Chinese company

In an interview with Reuters, Breton said he “preferred” the decision to sell only 25% of the terminal to China’s Cosco than the original proposal, which would have sold China more than a third and give it a blocking minority.

“We need to be extremely vigilant,” he said.

Breton said that since the EU had labelled China a “systemic rival” in 2019, the EU had adopted a series of measures they can use to block investment in critical infrastructure.

“It’s up to member states to use them and change their behaviour,” Breton said.

Scholz’s visit to Beijing will be the first by an EU leader since the start of the COVID-19 pandemic.

He has faced criticism ahead of the trip for allowing Cosco to invest in Hamburg, despite strong pushback from his governing coalition partners amid concerns over Chinese influence over critical infrastructure.

French and German government sources told Reuters French President Emmanuel Macron had suggested to Scholz they go together to Beijing to send a signal of EU unity to Beijing and counter what they see as Chinese attempts to play one country over another.

But the German chancellor declined Macron’s offer, the sources said.

“It’s very important that the behaviour of member states towards China… change in a way that’s more coordinated than individually-driven, as China obviously wants us to be,” he said.

The more defensive EU approach towards China was the result of Beijing’s attitude during the COVID-19 pandemic that saw Chinese autorities exploit countries’ reliance on China for equipments such as face masks to gain diplomatic leverage, he said.

“We can’t forget all of that,” Breton said. “The era of naivete is over. The European market is open, with conditions.”

He also warned European companies tempted to increase their investment in China that they did so at their own risk in a country that was becoming more “autocratic”.

Germany’s BASF said it would cut the size of its European sites “permanently” because of a triple burden of sluggish growth, high energy costs and over-regulation, and planned expansion in China instead.

“There are uncertainties for the companies that make this bet,” Breton said. “There’s a very important advantage in being based in Europe, with the rule of law, company protection and visibility,” he said.