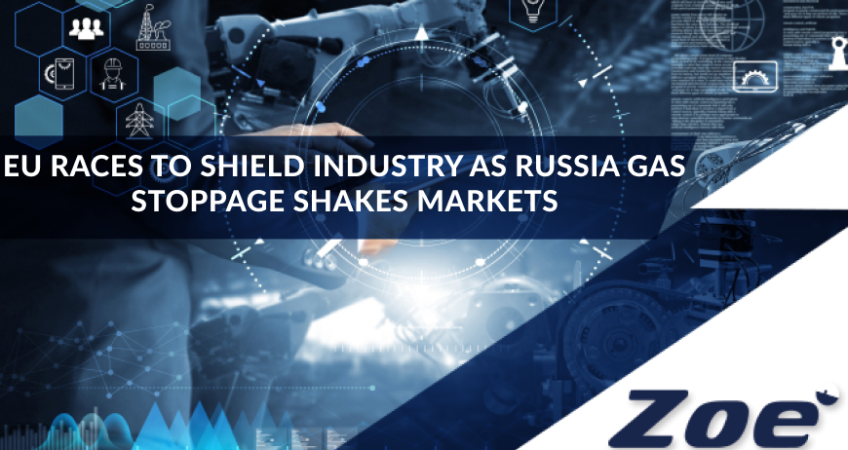 European gas prices surged, stocks slid and the euro sank on Monday after Russia halted gas flows via a major pipeline, sending another shock wave through economies in the region still struggling to recover from the pandemic.

European Union governments are pushing through multi-billion euro packages to prevent utilities buckling under a liquidity squeeze and to protect households from soaring energy bills.

Europe has accused Russia of weaponising energy supplies in retaliation for Western sanctions imposed on Moscow over its invasion of Ukraine. Russia blames those sanctions for causing the gas supply problems, which were down to a pipeline fault.

Many European power distributors have already collapsed and some major generators could be at risk, hit by caps that limit the prices rises they can pass to consumers or caught out by hedging bets, with gas prices now 400% more than a year ago.

“The government’s programme is a last-resort financing option for companies that would otherwise be threatened with insolvency,” Finland’s Prime Minister Sanna Marin said.

Utilities often sell power in advance to secure a certain price but must maintain a “minimum margin” deposit in case of default before they supply the power. This has raced higher with surging power prices, leaving companies struggling to find cash.

The benchmark gas price rose as much as 35% at one point on Monday after Gazprom said on Friday a leak in the Nord Stream 1 pipeline’s equipment meant it would stay shut beyond last week’s three-day maintenance halt.

European financial markets reeled on the news, with the euro sinking to a 20-year low and shares tumbling.

Nord Stream 1, which runs under the Baltic Sea to Germany, historically supplied about a third of the gas Russia exported to Europe, although it was already running at just 20% of capacity before last week’s maintenance outage.

“Problems with gas supply arose because of the sanctions imposed on our country by Western states, including Germany and Britain,” Kremlin spokesman Dmitry Peskov said on Monday.

“There are no other reasons that lead to problems with supplies,” Peskov added.

Adding to the standoff, he also said Russia would retaliate if G7 states imposed a price cap on Russian oil.

Although Russia also sends gas to Europe via pipeline across Ukraine, those supplies have also been reduced during the crisis, leaving the EU racing to find alternative supplies to refill gas storage facilities for winter.

Germany, more reliant than most EU states on Russian gas, has offered a multibillion-euro bailout to power utility Uniper. Berlin said also it would spend at least 65 billion euros to shield customers and businesses from soaring inflation, stoked by surging energy prices.

Berlin said on Monday it plans to keep two of its three remaining nuclear power stations on standby, beyond a year-end deadline to ditch the fuel altogether, to ensure it has enough electricity through the winter.

German Economy Minister Robert Habeck said in a statement on Monday that the move did not mean Berlin was reneging on its long-standing promise to exit nuclear energy by the end of 2022.

Meanwhile, French President Emmanuel Macron said after a call with German Chancellor Olaf Scholz that in the event of energy shortages arising from the Ukraine conflict, Berlin and Paris will support one another.

“Germany needs our gas and we need power from the rest of Europe, notably Germany,” Macron told a news briefing.

And Ukraine’s Prime Minister Denys Shmyhal urged the EU to supply Kyiv with more weapons, while offering to help out with gas deliveries to reduce the bloc’s dependence on Russia, which supplied around 155 bcm of gas to Europe last year.

Some energy-intensive industries in Europe, such as fertiliser makers and aluminium producers, have already scaled back production. Other industries, already grappling with chip shortages and logistics logjams, face rocketing fuel bills.

Several EU states have triggered emergency plans that could lead to energy rationing and fuelling recession fears, with inflation soaring and interest rates on the rise.

“We cannot rule out that Germany might look at rationing gas,” Uniper Chief Executive Klaus-Dieter Maubach told Reuters on the sidelines of the Gastech conference in Milan.

Germany, which is installing liquefied natural gas (LNG) terminals so it can ship in fuel and expand its range of global suppliers, is at phase two of a three-stage emergency gas plan. Phase three would see some industry rationing.

German households will be prioritised in the event of the plan being activated but will not be able to heat swimming pools or saunas, the energy regulator said on Monday.

The global market for LNG was already tight as the world economy sucked up supplies in the recovery from the pandemic. The Ukraine crisis has added further demand.

Norway, a major European producer, has been pumping more gas into European markets but cannot fill the gap left by Russia.

EU countries’ energy ministers are due to meet on Sept. 9 to discuss options to rein in soaring energy prices including gas price caps and emergency credit lines for energy market participants, a document seen by Reuters showed.

Klaus Mueller, president of Germany’s Federal Network Agency energy regulator, said in August that even if its gas stores were 100% full, they would be empty in 2-1/2 months if Russian gas flows were halted completely.Germany’s storage facilities are now about 85% full, while facilities across Europe hit an 80% target last week.