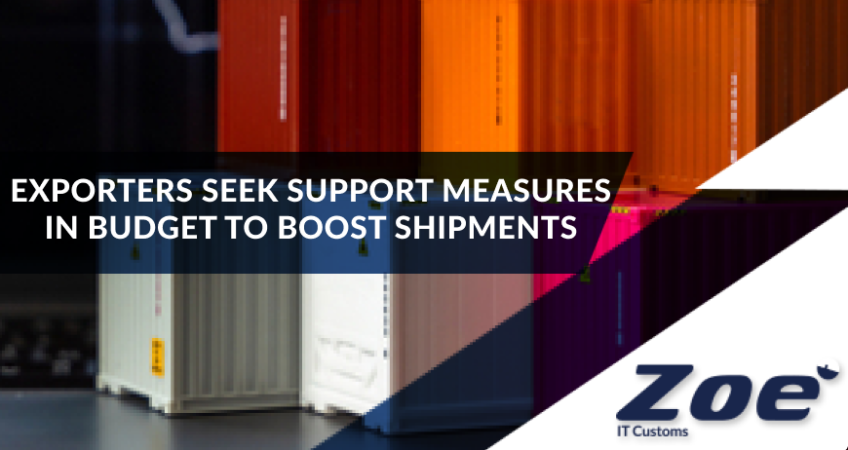 Exporters have demanded support measures, including enhanced allocations for RoDTEP scheme, high import duty on plastic finished goods, setting up of an Indian shipping line and reinstating exemption for duty free import of critical inputs for leather products, in the forthcoming Budget to promote growth of the country’s outbound shipments. They have also suggested fiscal incentives to address logistics challenges, and reduction of income tax on partnerships and LLP’s to support MSME players.

The Federation of Indian Export Organisations (FIEO) said that there is a need to encourage large Indian entities to build an Indian shipping line of global repute as it would help reduce dependence on foreign shipping lines.

It said that the export sector is facing major issues due to rising freight cost and its dependence on global shipping companies.

“Overseas marketing is a big challenge for exporters, more so for MSMEs, as it entails a very high cost. We need to bring the Double Tax Deduction Scheme for Internationalizations to allow exporters to deduct against their taxable income…A ceiling of USD 5 lakh may be put under the scheme so that the investment and tax deduction are limited,” FIEO Director General Ajay Sahai said.

Mumbai-based exporter and Chairman Technocraft Industries NSE -4.69 % Sharda Kumar Saraf said that Reimbursement of Duties & Taxes on Export production (RoDTEP) is one of the most important tools to support export marketing, but its present budget of about Rs 40,000 crore, is inadequate.

“We hope the finance minister will take cognizance of this fact and provide a suitable budget for RoDTEP,” Saraf said.

“For instance, import duty on PVC Resin is 10 per cent and that on value added PVC goods is also 10 per cent thereby there is no incentive to boost domestic production,” Goenka said.

Council for Leather Exports (CLE) Chairman Sanjay Leekha recommended reinstatement of the exemption for duty free import of critical inputs for leather garments and footwear; and extension of the basic customs duty exemption for import of lining and interlining materials.

These measures would promote value addition within the country and make the products competitive in the global markets as compared to the goods of competing countries, besides boosting exports, Leekha said.

He has also recommended reinstatement of basic customs duty on import of wet blue, crust and finished leathers as the exemption was removed last year.

Sharing a similar view, Chairman of Farida Group Rafeeq Ahmed said that steps for the labour intensive sector – leather in the budget will help in creating more jobs and pushing exports.

“The government should consider removing import duty on finished leather. Measures should be announced for setting up micro parks for the sector,” Ahmed said.