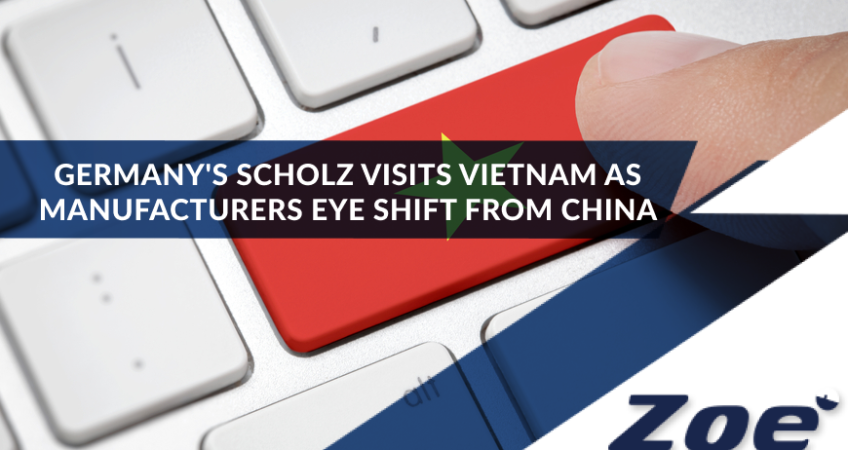 German Chancellor Olaf Scholz discussed energy and trade ties with Vietnam’s Prime Minister Pham Minh Chinh during a visit to Hanoi on Sunday, the first for a German leader in more than a decade.

Scholz’s stop in Vietnam on his way to the G20 leaders’ summit in Indonesia, highlights Vietnam’s growing role in global supply chains as many German firms consider diversifying their manufacturing operations by expanding their presence beyond China, their main hub in Asia.

At a joint news conference with Chinh, Scholz said Berlin wanted deeper trade relations with Vietnam and would support the country’s transition to a greener economy, including through the expansion of the metro system in Hanoi, Vietnam’s capital.

The Hanoi visit follows Scholz’s trip to China last week, the first by a Western leader in three years since the start of the COVID-19 pandemic. He will next visit Singapore before heading to the G20 summit on Nov 15-16.

Vietnam and Singapore are the only countries in Southeast Asia that have a free trade agreement with the European Union. As a result, they are the EU’s biggest trading partners in the region.

Germany is Vietnam’s second-largest trading partner among EU states after the Netherlands, with exchanges worth $7.8 billion last year, according to law firm Dezan Shira – far less however than the United States, China, Japan and South Korea.

About 500 German firms operate in Vietnam, of which around 80 have manufacturing plants in the country, according to the German chamber of commerce in Vietnam, AHK.

Among them are engineering giant Bosch, energy firm Messer, and several smaller companies involved in the global automotive supply chain.

Many more are looking to diversify some of their activities away from China where about 5,000 German companies operate, AHK head in Vietnam, Marko Walde, told Reuters.

Over 90% of German firms planning such a move look at Southeast Asia as their preferred choice, Walde said, noting that Vietnam and Thailand were favourites in the region.