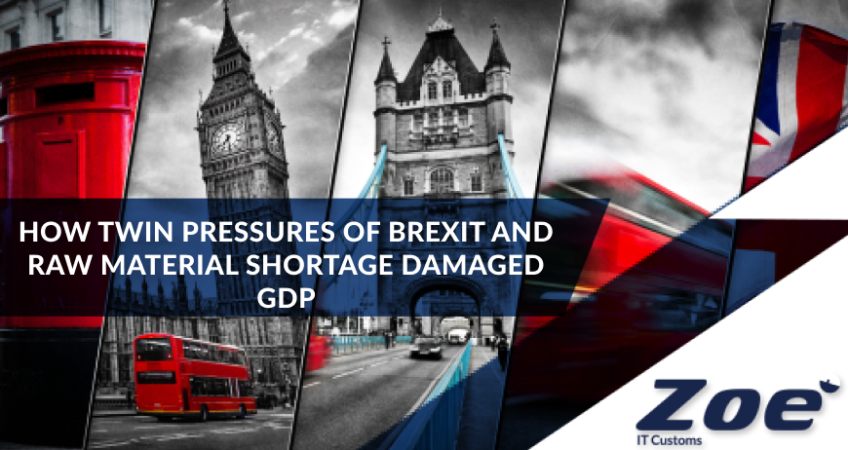 If the newly revised-down figures for Britain’s economic performance in the third quarter show anything, it is that consumers played the starring role in the recovery while the industrial sector struggled under the twin pressures of Brexit and global raw material shortages.

This should not come as a surprise. Ever since 2016’s narrow vote to quit the EU, businesses, and especially manufacturers, have failed to move out of second gear.

Disruptions to supply chains come and go – remember the chaos caused by Donald Trump’s trade battles with China – while Brexit is ever-present. Trade figures show a 8.8% fall in goods exports from July to the end of September, at a time when global trade was booming as coronavirus restrictions had eased.

France, which has a similarly sized economy to the UK’s, was also experiencing supply chain issues holding back manufacturing. But the lack of computer chips and vital components for cars only prevented French firms from enjoying an even stronger surge in production and exports.

British manufacturing, meanwhile, was, in addition, suffering from a decline in the workforce after thousands of people from abroad left or were deterred from coming by draconian visa rules and the UK’s handling of Covid-19. The staff shortages were made worse by what has become known as the great resignation, with almost one in four workers planning a job change.

For manufacturers, the problem is less about families calling time on long commutes and more about the high levels of long Covid that have hit their older, skilled workers. Then there is the trend for early retirement, much of it related to health issues.

France, meanwhile, has enjoyed a mass return to work that has pushed the participation rate above pre-pandemic levels.

The official figures also point to another troubling UK trend that strips away the gloss provided by low unemployment and high levels of vacancies. The Office for National Statistics said revised data for business investment showed the money spent upgrading plant, machinery and IT fell by 2.5% in the third quarter – revised down from an increase of 0.4% when the ONS made its first stab at a figure.

It means investment across businesses large and small remains a hefty 11.7% below that in the fourth quarter of 2019, despite the chancellor, Rishi Sunak, handing firms tax relief on investment worth 130% of profits to spur an revival.

Low business investment is an indicator of poor economic health and probably the most telling indicator of UK firms’ reluctance to bet on a brighter future.

There was better news from figures for consumer spending growth, which was 2.7% higher compared with its previous estimate of 2%, making it the largest contributor to headline GDP growth in the quarter by some margin. Much of the extra spending was on restaurants and leisure activities, as previously hibernating households ventured outside during the summer and autumn.

Revised figures showed consumer spending was also more resilient during the previous lockdowns, going back to March 2020, indicating the cliff-edge drop in activity in the spring last year was less than first estimated and the momentum of spending going into 2021 was stronger.

The ONS said the output loss during the initial phase in the pandemic was smaller than thought and GDP was just 1.5% below its pre-pandemic peak in 2019, rather than the 2.1% previously reported.

That said, the reliance on consumer spending meant the momentum was weaker than first estimated and the third-quarter growth figure was just 1.1%, down from 1.3%.

With manufacturers slipping from second gear into reverse during the autumn – output dropped back 0.7% in the third quarter – and construction output following the same negative trajectory – down 1% in the same period – consumer spending will need to soar in the new year to make up the difference.