Include women entrepreneurs as stakeholders in consultations on FTAs: ICRIER 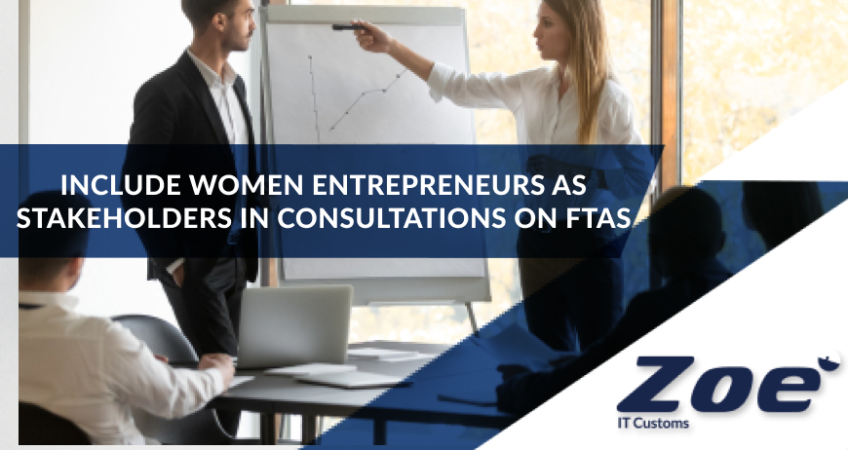 Economic think tank ICRIER has suggested the government to include targeted measures in the forthcoming foreign trade policy to boost women’s participation in global commerce and involve them as key stakeholders in consultations for free trade agreements. A policy brief Women and Trade: Towards an Enabling Ecosystem in India — brought out by Indian Council for Research on International Economic Relations (ICRIER) — has said that support for internationalisation of women-owned enterprises targeted measures to boost women’s participation in international trade has lagged.

“It is recommended that the upcoming foreign trade policy… (can) be used to mainstream gender in the national trade agenda.

“The recognition of the gender-specific impediments and vulnerabilities that women entrepreneurs face should be reflected in both the vision and strategy, with a holistic focus on export promotion, integration in global value chains, ease of doing business, and trade facilitation just as MSMEs have been explicitly acknowledged to have strategic significance, especially with regard to manufacturing and employment generation, and are accordingly identified for focussed interventions to boost exports,” the council said in a statement.

Foreign trade policy (FTP), which is formulated by the commerce ministry for five years, provides guidelines for enhancing exports to push economic growth and create jobs. In such a policy, the government announces incentives for goods and services exporters.

The think tank has also suggested setting up a National Council for Women’s Entrepreneurship under the chairmanship of the Prime Minister.

Collection of gender-disaggregated data and statistics on trade participation and performance as well as regular gender stakeholder consultations are vital for informed policy-making and impact assessment, it said.

These should be an integral part of the institutional setup across the gamut of relevant ministries, allied regulatory agencies, , export promotion councils, and specific product promoting boards, it added.

“…India should also include women entrepreneurs as important stakeholders in domestic consultations on free trade agreements (FTAs) and their aspirations and concerns should be reflected in the final texts through gender-responsive provisions,” it said.

Traditionally, it said, India has been wary of linking issues, such as human rights, labour standards, gender, and the environment with trade, both bilaterally and multilaterally, by and large regarding them as ‘veiled protectionism’.

“However, with the global discourse veering towards inclusiveness in trade and sustainability, more so in the context of the COVID 19 pandemic, India should embrace a more flexible and pragmatic approach and not lag behind the curve,” it suggested.

Under an FTA, two trading partners reduce or eliminate customs duties on the maximum number of goods traded between them. Besides, they liberalise norms to enhance trade in services and boost investments.