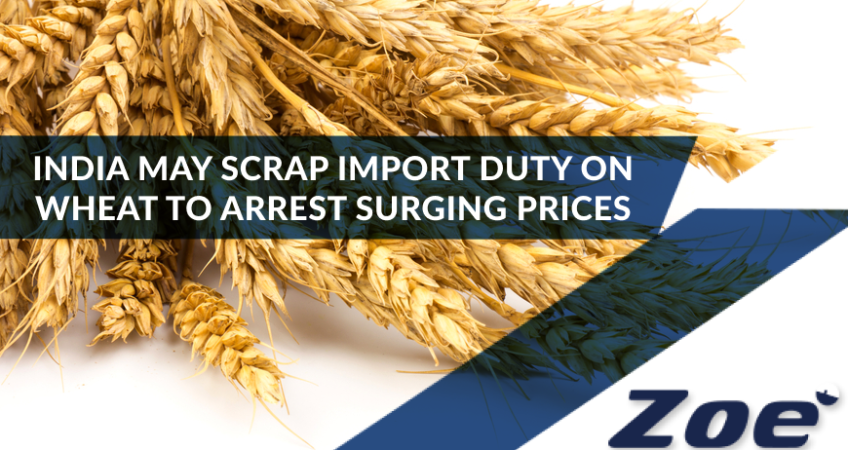 India could scrap a 40% duty on wheat imports and cap the amount of stocks traders can hold to try to dampen record high domestic prices in the world’s second biggest producer, government and trade officials told Reuters on Monday.

The South Asian country barred wheat exports in May after the crop suffered a heatwave, but domestic prices still rose to a record high. Yet, international prices are still way above the domestic market, making it unviable for traders to buy from abroad.

If the government does remove the duty, and international prices also fall, then traders say they could start importing, especially during the upcoming festival season, when higher demand typically drives domestic prices higher.

“We are exploring all possible options to bring down the prices,” said a senior government official who held discussion with industry officials last week.

New Delhi could scrap the 40% import duty and impose stock limits on wholesalers and traders to signal to the market that the government will do everything in its power to keep prices in check, said the official, who declined to be named due to the sensitivity of the subject.

Domestic wheat prices ended last week at a record 24,000 rupees ($301.57) per tonne, having risen 14% from lows struck after the government surprised markets on May 14 by banning exports, ending hopes that India could fill the market gap left by the missing Ukraine grain.

Domestic prices are still nearly a third lower than global prices, said a Mumbai-based trader with a global trading firm, who described Indian wheat as the cheapest in the world.

“If global prices fall by another 20% and Indian prices continue their rally, then may be, sometime after few months, imports might become feasible,” the trader said.

The government has limited options to intervene in the market this year since its procurement has fallen 57% to 18.8 million tonnes, said a New Delhi-based dealer with a global trading firm.

“New crop would become available only after 9 months. The government has to use stocks very carefully until then to avoid any shortage,” the dealer said.