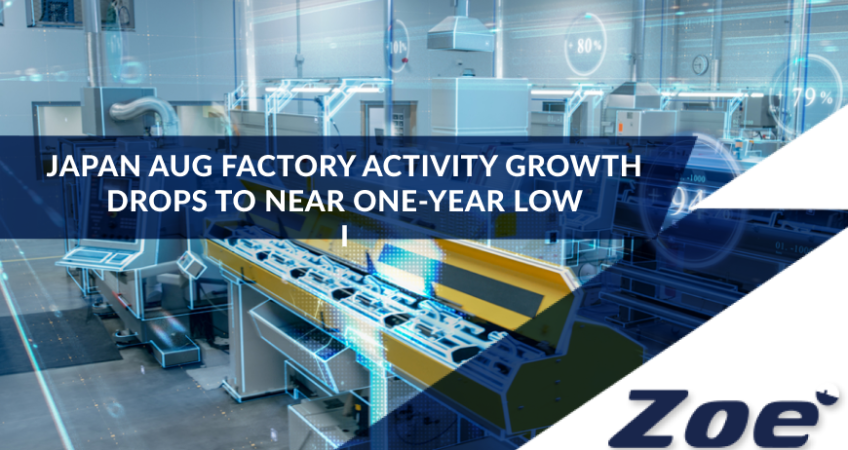 Japan’s manufacturing activity grew at its weakest rate in nearly a year in August, as businesses took a hit from worsening conditions in the global economy and declining demand from China and South Korea.

The weaker expansion sends a warning sign about the outlook for global growth to policymakers hoping that the world’s third-largest economy will benefit from stronger trade.

The final au Jibun Bank Japan Manufacturing Purchasing Managers’ Index (PMI) fell to a seasonally adjusted 51.5 in August from a final 52.1 in the prior month.

The reading remained above the 50-mark that separates contraction from expansion, but was the weakest growth rate since September 2021. It was higher than a 51.0 flash reading.

The headline figure suffered from the second straight month of declines in output and overall new orders. New orders shrank at the fastest rate since October 2020, with export orders falling for the sixth month in a row.

The dip in manufacturing activity was likely to continue in the near term, said Usamah Bhatti, economist at S&P Global Market Intelligence, which compiles the survey.

“The absence of new orders amid dampening client confidence lifted capacity pressure on manufacturers,” he added.

“A benefit that has come from softer demand conditions is that pressure on supply chains has been given the opportunity to ease.”

Japan’s factories extended an expansion to a second month in July on a jump in motor vehicle production, government data showed on Tuesday.

But it also showed electronic parts and devices production suffered its biggest one-month decline since comparable data became available in February 2013, suggesting deeper cracks in the outlook for economic growth.

The frail conditions faced by Japanese manufacturers were also visible in the PMI survey, which showed the first decrease in backlogs of work that are an indicator of the state of outstanding business since February 2021.

Input costs continued to rise rapidly, though at a slightly easier pace than in July.