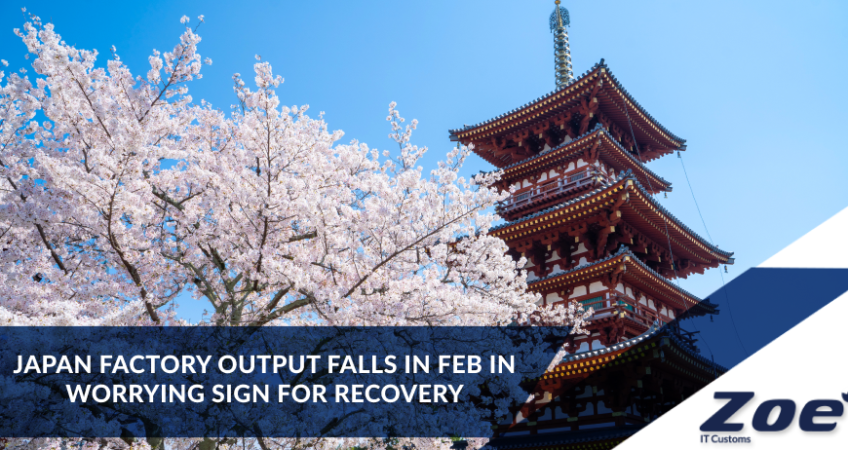 Japan’s industrial output fell in February due to declines in the production of cars and electrical machinery, in a worrying sign for an economy struggling to recover from the deep impact of the coronavirus pandemic.

The world’s third-largest economy is expected to contract in the current quarter due to a second coronavirus-related state of emergency that was imposed from early January for Tokyo and some neighbouring prefectures.

Official data released on Wednesday showed factory output shrank 2.1% from the previous month in February, dragged down by falls in production of cars, electrical machinery and information and communication equipment.

“The 2.1% m/m fall in industrial production in February came off the back of a strong January and shouldn’t prevent manufacturing output rising across the first quarter,” said Tom Learmouth, Japan economist at Capital Economics.

“The data suggest that the earthquake across parts of northern Japan on (the) 13th February may have dented output a little.”

The fall in output was much weaker than the previous month’s sharp 4.3% gain and worse than a 1.2% contraction forecast in a Reuters poll of economists.

Manufacturers surveyed by the Ministry of Economy, Trade and Industry (METI) expected output to drop another 1.9% in March, followed by a 9.3% rebound in April.

The government kept its assessment of industrial production unchanged, saying it was picking up.

Factory output had rebounded in January largely thanks to a sharp increase in the production of electronic parts and general-purpose machinery.

But in February declining production of cars, electrical machinery, chemicals and information and communication electronics equipment outweighed growing demand for tech-making equipment that has been a major output driver.

Some analysts worry that Japan’s economic recovery will be dragged down by weak spending at home and a slower-than-anticipated demand recovery abroad as economies slowly reopen, even in countries that have rolled out COVID-19 vaccines.

The government on Tuesday released data showing retail sales fell 1.5% in February compared with the same month a year earlier, signalling weak sentiment among consumers who remain worried about the health crisis.