Retailers pay more to fly everything from China 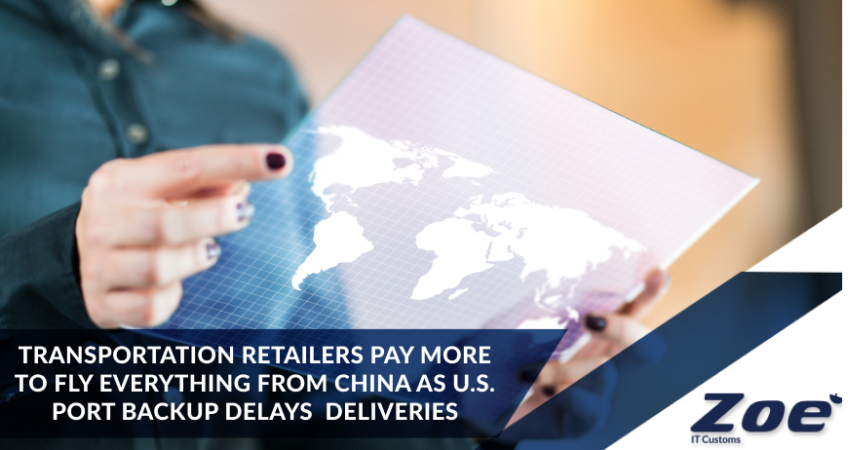 A ship with 197 containers of Peloton bikes and merchandise circled at anchor just outside the Port of Los Angeles right before Christmas, entering a holding pattern on Dec. 22 until it was allowed to dock Jan. 2, according to global shipping data company MarineTraffic.

“The ship, and Peloton’s expected supply time, lost 12 days due to this while their product was nearly within swimming distance of shore,” Import Genius trade data analyst William George said. “This is a crazy illustration of the problem Peloton and other U.S. importers are struggling with.”

The combination of a record number of containers arriving at the Port of Los Angeles — the busiest container port in the Western Hemisphere due to its proximity to Asia — and Covid-19 is slowing down imports to the U.S. Around 800 of the International Longshore and Warehouse Union’s 15,000 members have been out of work due to Covid, according to data from the union.

The congestion at ports has some companies forgoing maritime shipping in favor of airfreight to get popular or seasonal items on store shelves faster. Air rates are more expensive than shipping via ocean freight, but they’ve been dropping in recent months, according to online international freight marketplace Freightos.

“While air cargo had its period of volatility in the first few months of Covid, tracking a 400% increase between February and April 2020, ocean freight has become a bottleneck in global supply chains, making air cargo a more viable option in some cases,” Freightos Chief Marketing Officer Eytan Buchman said.

Some of the congestion at U.S. ports is expected to ease as more longshore workers get vaccinated against the coronavirus. Just 5% of longshore workers ease receives vaccinations so far, Port of  Los Angeles executive director Gene Seroka said. He added that the port is lobbying  ” all levels government” for more vaccines to help ease congestion.

Peloton, which declined to comment for this article, referred CNBC to the company’s quarterly shareholder letter released last month. The letter said profit margins during the last three months of the year — which include the critical holiday shopping season — were squeezed by $100 million due to higher shipping costs.

“The global increase in shipping traffic has added significant delays to all sorts of goods coming into US ports, including Peloton products,” Peloton CEO John Foley said in the Feb. 4 letter. “These unpredictable delays have resulted in painful delivery reschedules for many people as Peloton Bikes, Treads, and accessories have been held at Port for upwards of five times longer than usual.”

Peloton’s December shipment struggle is just one example of the variety of goods getting held up at U.S. ports.

Thirty container vessels were at anchor outside the ports of Los Angeles and Long Beach as of Monday, according to MarineTraffic data. More than 30 container ships are expected to arrive in Los Angeles by the end of March, and at least 27 ships are slated to dock in Long Beach in that time.

Among the anchored vessels waiting to unload at Los Angeles is the APL Charleston, which carried the delayed Peloton deliveries in December. The ship arrived again fully loaded with Chinese exports on Feb.18.

“It is a reality many vessels, supply chain and logistics providers are currently facing at the Port of Los Angeles and Port of Long Beach,” Ashiq said in an interview. He added that the median time a container ship spent anchored outside the dock last week was just over 7.5 days before it could head inland.

“Now that the APL Charleston is back at anchorage, she may face similar circumstances as she did from her previous port visit in December, but of course this is shipping so anything can happen,” Ashiq said.

The bottleneck at ports has added costs to maritime shipping that make airfreight, which is normally significantly more costly, look like a relative bargain, especially when factoring in the time saved. Prices on air shipping have also dropped dramatically in recent months.

The price of a 250-kilogram air shipment traveling from China to the U.S. has dropped from about 60% of the cost of a full container to around 36%, Ashiq said.

“In other words, for the right type of cargo, and certainly the right value, air is absolutely becoming a more enticing option, with both capacity and far faster transit times,” Freightos’ Buchman said.

The time saved in transporting a product justifies the cost for some clients who are trying to meet consumer demand, Seko Logistics Chief Growth Officer Brian Bourke said.

“If you want to ship a hot tub via ocean from Shanghai to New York, that will cost you around $1,000 for the transportation for a lighter hot tub, but it will take a minimum of 35 to 45 days,” Bourke said. He added that doesn’t include an additional seven to 14 days if you need to book in advance. Airfreight costs around $2,000 to $3,000 to ship, depending on the weight, he said.

“But it will only take you three to four days to get your hot tub,” Bourke said. “So, paying two to three times will save you four to seven weeks right now. Ultimately the math makes sense for certain shippers right now.”

Canyon Bicycles USA Transportation Manager Kim Peterson said the company is shipping most of its inventory via water, but added that its most popular bikes are being shipped by air to meet a demand surge.

“Air is faster, and we need to meet the demand of our customers,” Peterson said. “While I could pay an additional $1,000 to $2,000 to get my product in (an ocean) container at the head of the line in China, it doesn’t matter because the cargo then sits in the LA congestion.”

Shipping by ocean took 20 to 30 days before the pandemic, Peterson said. Now it’s about 60 to 75 days while airfreight takes three to five days.

“It’s a huge difference,” Peterson added. “We have a backorder in Asia right now,” he said. “We can’t wait. It would have an impact on sales.”

“We are regularly flying 65-inch televisions in from China to the U.S.,” Richard said. “We saw a 40% increase in airfreight in December. Large items like hot tubs were also being transported. Our ocean freight teams are now selling airfreight.”

Richard added that large home-recreation items like ping pong tables and exercise equipment such as treadmills would typically be shipped by ocean because of the cost. Now they are moving by air because of a demand spike as the pandemic has people locked indoors, looking for ways to stay fit and entertain outside.

“Barbecue equipment and associated goods such as lawn/patio furniture, inflatable pools, filter equipment, and everything that could be used to improve the shelter at home experience in lieu of family vacations are now moving by air,” he said.

The lack of reliability has stretched the functionality of logistics and supply chains to their limits.

“We see those industries who need expedited shipping being pushed into the air versus the ‘hurry up and wait’ on the ocean front,” said Matt Castle,vice president of airfreight products and services at C.H. Robinson.

Recreation vehicles and parts that used to ship by ocean have shifted to airfreight, he said. “One of the things I never thought we would see being moved by air was vacuum cleaners. It’s a hot item now with so many people at home.”

Castle noted that the move to air shipping was sparked by a combination of factors: companies with a narrow seasonal window for selling products and production-based industries looking to restore some sort of rhythm and catch-up on inventory.

“The ocean congestion is compounding that need to meet orders and driving demand for airfreight,” Castle said.

Stephen Svajian, CEO and co-founder of Anova Culinary — which sells its precision countertop combo-ovens and cookers to Costco, Target and Amazon — said they are increasing their airfreight orders given the surge in demand fueled by the “restaurant experience at home.”

“We decide on what products to air freight based on the retail set date and consumer expectations. We don’t want to be out of stock and not fulfill orders,” Svajian said. “There is more pressure to use air this year because of delays on the ocean.”

Companies outside the U.S. are also shipping more products through the air. Castle said he is also seeing companies in Europe making the switch. “That market is very strong. There is a lack of container capacity everywhere.”

Air is also becoming an option for U.S. exporters struggling to transport their products overseas. Carriers make far less shipping exports from the U.S. to China — $744 per container versus $4,922 for Chinese exports bound for the U.S. The time and money saved by not having to load, unload and clean empty containers makes up for the lost money on the route back to Asia.

It’s also costing U.S. farmers who are struggling to ship their commodities overseas. Their access to international markets “is being severely undermined by the unprecedented dysfunction and cost of ocean transportation services,” Agriculture Transportation Coalition executive director Peter Friedman said.

Seko’s Richard added that spices and perishable commodities like lobster started shipping by air to China as early as October.

However, there doesn’t seem to be a quick fix to unclog U.S. ports, which leaves companies like Canyon with few options.

“In the cycling world, when the sun comes out, people want to take a ride on a bike,” Canyon’s Peterson said. “Demand is still high. It’s quite obvious, we will have to continue and do more air.”