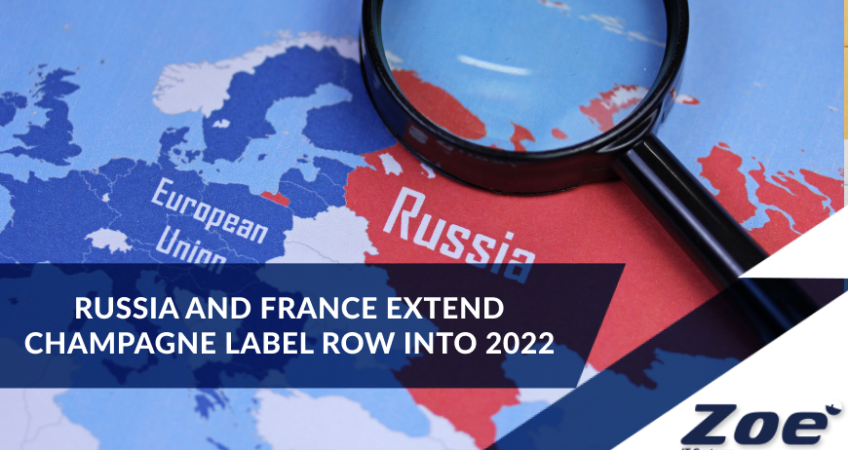 The row between France and Russia over the labelling of Champagne and sparkling wine just got extended.

Russia has acceded to a two-month moratorium (until December 31) on the implementation of their recent law preventing champagne (made in France and protected as an original product) from using its own name in Cyrillic on labels attached to bottles sold in Russia.

“This does not solve everything, and we are determined to move the issue forward definitively during this opening period of work,” said foreign trade minister Franck Riester in a written statement.

“We remain fully mobilised to protect our exporters, defend our geographical indications and promote our agricultural excellence,” he added.

Since July 2, a modification of the Russian law on the trade of alcoholic products obliges the distributors of champagne to exchange the prestigious title of “champagne” for that of “sparkling wine” on the label of the bottles written in Cyrillic, reserving the name “Champanskoye” for Russian producers of sparkling wines.

Outrage, of course, ensued in north-east France as producers and distributors of champagne, anxious to protect their protected designation of origin, uncorked their indignation. Several French ministers followed suit and led the French government to threaten action at the World Trade Organization.

The Interprofessional Committee of Champagne Wine (CIVC), which had advised producers in early July to temporarily suspend their exports to Russia in reaction to this new provision of the law, ruled on September 11 for the resumption of shipments to Russia from September 15, in a gesture of appeasement.

Russia is, with the United States and Haiti, one of the only nations not to recognise the appellation of origin (AOC) “champagne” despite twenty years of discussions.

The relationship between Russia and Champagne goes back a lot further than two decades, however.

Prince Lev Sergeyevich Golitsyn is a name you may not be familiar with, but he pioneered the manufacture of sparkling wine in Russia in the 19th century. Having studied in France, he returned to his homeland in the late 1870s and bought a house with a good deal of land in Novyi Svet, Crimea. That land became dedicated to viticulture, and soon he was growing a huge number of varieties there. He even dug tunnels below sea level to house his cellars in order to keep them at a consistent temperature.

The wine from this estate was served at the coronation of Tsar Nicolas II. Then in 1900, in something of a precursor to the 1976 Judgement of Paris (where wines from the US beat top French growths in a blind tasting), Golitsyn’s sparkling wine beat the French competitors to win the Grand Prix de Champagne at the Paris Exhibition.