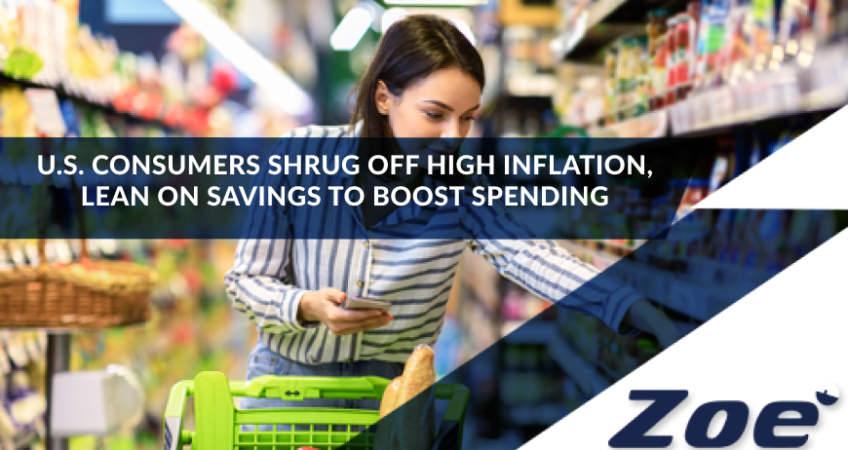 U.S. consumer spending rose more than expected in March amid strong demand for services, while monthly inflation surged by the most in 16-1/2 years, giving the Federal Reserve ammunition to hike interest rates by a hefty 50 basis points next week.

The case for an aggressive monetary policy stance from the U.S. central bank was also strengthened by other data on Friday showing compensation for American workers recording its largest increase in more than three decades in the first quarter. Companies are boosting wages in a desperate bid to attract scarce workers.

The strength in consumer spending heading into the second quarter allayed fears of a recession after the economy unexpectedly contracted in the first three months of the year.

“There’s nothing about to go wrong with the economy with the consumer still cheerleading the way forward to prosperity,” said Christopher Rupkey, chief economist at FWDBONDS in New York. “No recession on the horizon yet.”

Consumer spending, which accounts for more than two-thirds of U.S. economic activity, surged 1.1% last month, the Commerce Department said. Data for February was revised higher to show outlays advancing 0.6% instead of 0.2% as previously reported.

Spending on services increased 1.1%, lifted by demand for international travel, dining out at restaurants as well as hotel stays. There were also increases in healthcare spending and outlays on recreation and transportation services.

Spending on goods increased 1.2%, mostly reflecting gasoline and other energy products, as well as food, whose prices have risen sharply. Spending on long-lasting goods like motor vehicles fell for a second straight month because of shortages.

The data was included in the advance first-quarter gross domestic product report on Thursday, which showed the economy contracting at a 1.4% annualized rate because of a wider trade deficit. This was due to surging imports, and a slower pace of inventory accumulation relative to the fourth quarter’s robust rate. Consumer spending picked up last quarter, combining with business investment to boost domestic demand.

March, however, likely marked the peak in that price index. Economists expect the increase in the annual PCE price index to start slowing as last year’s large gains drop out of the calculation. In addition, the shift in spending back to services from goods is seen easing pressure on supply chains.

Annual inflation by all measures has overshot the Fed’s 2% target and the central bank is expected to hike interest rates by half-a-percentage point next Wednesday. The Fed raised its policy interest rate by 25 basis points in March, and is soon likely to start trimming its asset holdings.

Even if inflation has peaked, it could remain uncomfortably high for a while. A separate report from the Labor Department on Friday showed its Employment Cost Index, the broadest measure of labor costs, jumped 1.4% in the first quarter after advancing 1.0% in the October-December period.

Labor costs soared 4.5% on a year-on-year basis, the biggest gain since 2001, after increasing 4.0% in the fourth quarter.

The ECI is widely viewed by policymakers as one of the better measures of labor market slack and a predictor of core inflation as it adjusts for composition and job quality changes.

“With compensation costs from an overheated labor market a more persistent source of inflation and more within the Fed’s purview, today’s report ups the chance for multiple 50 points rate hikes at coming meetings, beginning with next week’s meeting,” said Sarah House, a senior economist at Wells Fargo in Charlotte, North Carolina.

There were a near record 11.3 million job openings at the end of February.

Wages and salaries increased 1.2% last quarter after rising 1.0% in the fourth quarter. They were up 4.7% year-on-year. But high inflation eroded the gains for employees. Inflation-adjusted wages fell 3.6% year-on-year.

Benefits jumped 1.8%, the most in 18 years, after increasing 0.9% in the October-December quarter.

With inflation wiping out the compensation gains, consumers are tapping into savings to fund their spending, which some said suggested a slowdown in consumption was looming.

The saving rate dropped to 6.2%, the lowest since December 2013, from 6.8% in February. Consumers accumulated more than $2 trillion in excess savings during the pandemic.

“Rising prices is eating away at the real value of these savings,” said Andrew Hollenhorst, chief U.S. economist at Citigroup in New York. “Real incomes excluding transfer payments are essentially flat over the last six months which implies either wages need to accelerate further or real consumption will continue to slow.”