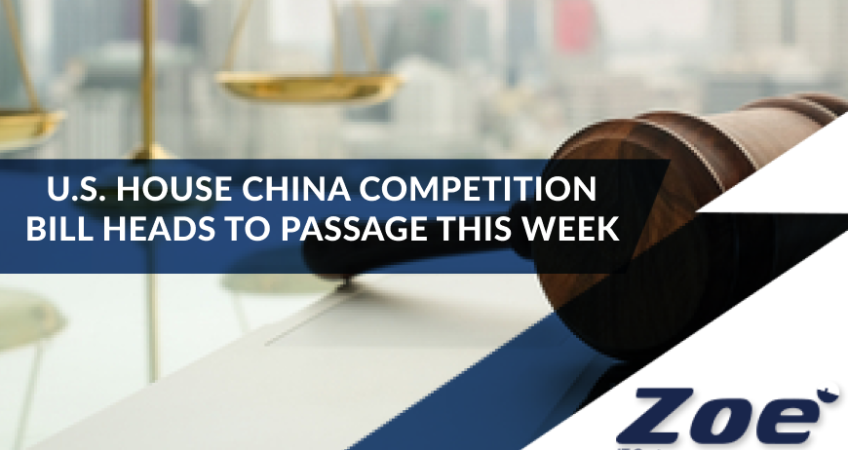 The U.S. House of Representatives on Wednesday advanced a multibillion-dollar bill aimed at increasing American competitiveness with China and boosting U.S. semiconductor manufacturing, teeing up the legislation for full approval by the chamber this week.

Democratic President Joe Biden’s administration has been working to persuade Congress to approve the bill, which includes $52 billion to subsidize semiconductor manufacturing and research, as shortages of the key components used in autos and computers have been exacerbated by supply chain bottlenecks.

The Democratic-controlled House approved the rule for the “America Competes Act” by 219 to 203, largely along party lines. House aides said they expected a vote to pass the full measure on Friday, after considering a number of amendments.

The bill has several trade provisions and would also authorize $8 billion in U.S. contributions to the Green Climate Fund, established by the Paris Agreement to combat climate change, to help developing countries cope.

Republicans have proposed an amendment to strip that funding. Three Democrats want to boost it by $3 billion.

House Republicans complained that Democrats did not include them in drafting the legislation. They harshly criticized the climate provisions and said they could be used to help Beijing.

The Senate passed its own bill – the U.S. Innovation and Competition Act – by 68-32 in June. That legislation includes $52 billion to increase domestic semiconductor production and authorizes $190 billion for U.S. technology and research to compete with China.

The House bill authorizes $45 billion to strengthen supply chains and manufacturing of critical goods for health, communications and other sectors.

If the full House measure passes, the Senate and House will have to reconcile differences between their bills. The final version would go back to both chambers for full approval and then, should that legislation pass, to Biden for his signature.