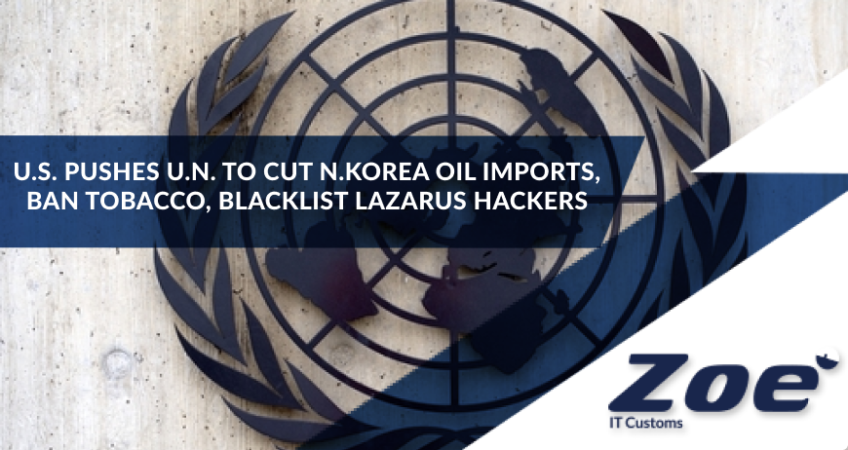 The United States is pushing the U.N. Security Council to further sanction North Korea over its renewed ballistic missile launches by banning tobacco and halving oil exports to the country and blacklisting the Lazarus hacking group, according to a draft resolution reviewed by Reuters on Wednesday.

The United States circulated the draft to the 15 council members this week. It was not immediately clear if or when it could be put to a vote. A resolution needs nine “yes” votes and no vetoes by Russia, China, France, Britain or the United States.

Russia and China have already signaled opposition to strengthening sanctions in response to Pyongyang’s launch last month of an intercontinental ballistic missile – it’s first since 2017.

U.S. special envoy on North Korea, Sung Kim, told reporters last week that the United States had discussed the draft U.N. text with China and Russia, but “unfortunately, I cannot report that we have had productive discussions with them thus far.”

U.S. and South Korean officials and analysts have also said there are increasing signs that North Korea could also soon test a nuclear weapon for the first time since 2017.

The U.S.-drafted U.N. resolution would extend a ban on ballistic missile launches to include cruise missiles or “any other delivery system capable of delivering nuclear weapons.”

It would halve crude oil exports to North Korea to 2 million barrels annually and halve refined petroleum exports to 250,000 barrels. It also seeks to ban North Korean exports of “mineral fuels, mineral oils and products of their distillation.”

North Korean leader Kim Jong Un is known as a chain smoker – frequently seen with a cigarette in hand in photographs in state media – and the draft resolution would ban exports to North Korea of tobacco and manufactured tobacco.

North Korea has been subjected to U.N. sanctions since 2006, which the U.N. Security Council has steadily – and unanimously – stepped up over the years in a bid to cut off funding for Pyongyang’s nuclear weapons and ballistic missile programs.

The council last tightened sanctions on Pyongyang in 2017, but since then Beijing and Moscow have pushed for an for an easing of the measures on humanitarian grounds.

The United States and allies say Kim is to blame for the humanitarian situation, accusing him of diverting money to nuclear weapons and missile programs instead of spending it on the North Korean people.

The hermit Asian state has successfully evaded some U.N. sanctions and continued developing its programs, according to independent U.N. sanctions monitors, who reported in February that North Korean cyberattacks on cryptocurrency exchanges were earning Pyongyang hundreds of millions of dollars.

The draft resolution would impose an asset freeze on the Lazarus hacking group, which the United States says is controlled by the Reconnaissance General Bureau, North Korea’s primary intelligence bureau.

The Lazarus group has been accused of involvement in the “WannaCry” ransomware attacks, hacking of international banks and customer accounts, and the 2014 cyber-attacks on Sony Pictures Entertainment.

The draft resolution would also ban anyone from “procuring or facilitating the procurement of information and communication technology -related services” from North Korea.

When asked about the U.S. push last week, China’s U.N. Ambassador Zhang Jun said: “We do not think that additional sanctions will be helpful in easing the tension, it might even make the situation worse.”